Resistance bands are very adaptable and a large number of reresistance band excises can be developed from them with only minor adjustments. Even smaller muscles that do not get involved when exercising with free weights can easily be worked on with the help of resistance bands. This makes it a perfect accessory for athletic conditioning as well as injury prevention and rehabilitation.

Why Train With Heavy Resistance Bands?

Maximizing your work-out intensity isn’t the only reason you should be grabbing those heavy resistance bands. There are many more reasons you should be opting for heavy resistance. It can be a little scary to train with heavier resistance, especially if you have been sticking to light or medium resistance bands. The key is choosing exercises that do not place pressure on your joints and tone down your tempo to slow motion to ensure that your stabilizers are on board. Squats and pulls are generally good to begin with.

If you aren’t achieving the desired results even after a reasonable period of time, training with a stronger and heavier band will blow through band plateau and make exercises work for you again.  However, you should make sure that you are being safe and don’t start out doing the same volume of workout with heavier bands.

People become complacent when it comes to resistance bands or even weights. They think the muscle bias is disturbed if they grab a band of different resistance. Now when you go back to the lighter, smaller band after the heavier one, you are basically going for a very low level of resistance and your nervous system has to work extra to bring in more muscle fiber.

Maximize your workout intensity by exercising with heavy resistance bands that are thick and highly resistant to wear and tear. Be cautious and do not overexert yourself. Here are some exercises to try:

Give the regular lunges a miss and try the more effective resistance band lunges.

This exercise works well for shoulder muscles. Since it is beginner level exercise, performing it with a heavy band will lead to more effective results.

This is also known as the band walk and is known to work on the abductor muscles. It strengthens your quads and glutes.

Band split squads are good for strengthening your hip muscles.

Previous TRX Training Equipment
Next Who Trains on the TRX? 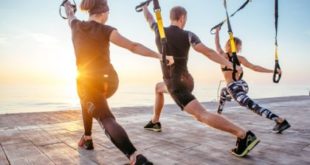 Do you realize about TRX suspension workouts? No worries in the situation you don’t, it …