A whole body resistance band workout is primarily intended for intermediate and advanced exercisers which include basic moves for the whole body with the help of resistance bands. As these exercises target more on stamina, one has to adjust your hand and body position to get maximum tension from each move. A few of the most common workouts for resistance bands are alternate chest press, one arm chest fly, resisted push-ups, lat pulls, and rear delt fly.

In the alternate chest press resistance band workout, the band is wrapped around a sturdy object behind your chest. Keeping the elbows bent 90 degrees and forearms parallel to the floor and keeping the right arm stationary, press the left arm out. Now bring the left arm back and then press forward with the right arm.

In one arm chest fly the band is wrapped around a well-built object at about shoulder height. Holding the handle in right hand, wrap the loop around the hand. While doing this type of resistance band workout arm should be kept straight at shoulder level. Contract the chest to bring the arm in, towards the mid-chest region. The Same procedure should be repeated.

In resisted push-ups start from your knees or toes and wrap the band over your back, holding onto the tops, keeping both hands flat on the floor. In this type of resistance band workout, one can loop the band to add tension and bend elbows into the push-up.

In lat pulls start with arms straight up overhead, holding the band towards the middle. To increase tension one can adjust hands closer. While bringing the elbows towards the rib cage contract the back and pull the band out. Repeat the same by raising the backup.

In rear delt fly, hold the band in the middle by keeping arms straight out in front of you. The shoulder blades have to be squeezed together while pulling the band. Now return to the start position and repeat by keeping tension on the band. 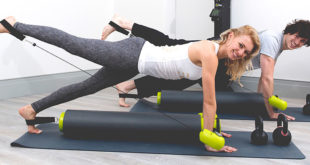